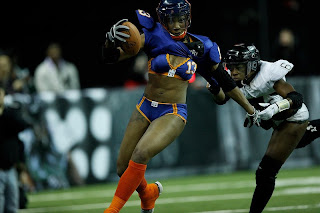 It was a wild scene in the Sears Centre Friday night as the Chicago Bliss opened the 2013 season against the Los Angeles Temptation. There was a sense of joy and relief throughout the arena following the wake of all the chaos in Boston. The arena even played Sweet Caroline right before kickoff.

After the opening introductions were over it was time to kickoff the 2013 season. The action got started after Bliss running back Chrisdell Harris took it up the middle and scored the first touchdown of the Bliss' season. Quickly responded by Ashley Salerno's rushing touchdown, but turnovers were costly.

The game was chippy throughout as there were several scuffles that partook during the game. Quarterback Heather Furr was great in this game, yet it was two mistakes, a fumbled option pitch and an interception that proved to be the factors between winning and losing.

Chrisdell Harris did score two touchdowns during the game, giving Bliss fans plenty to look forward to for the upcoming 2013 season.

After the game Furr said "once Chrisdell and I get back on the same page that we had during practices and the off-season, we'll be fine." The game MVP was Chloe Butler of the LA Temptation as she scored her first touchdown of the season.

The Chicago Bliss' next game will be at home May 10th against the Las Vegas Sin, while the Temptation will be in Seattle to take on the Mist on May 4th.