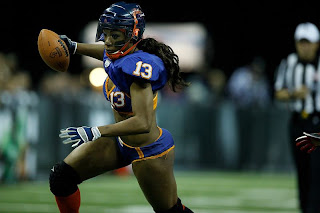 As all great players learn, bumps must come before success. Chicago Bliss running back ChrisDell Harris and the team suffered a tough 2012 season, but 2013 has brought new light for both Harris and her team.

Through two weeks the Bliss are 1-1 and more importantly ChrisDell Harris also know as "Ferrari" has put on a showcase which includes a four touchdown performance against the Las Vegas Sin. Her six touchdowns in two games has not only put defenses in check but the entire LFL on notice.

Her aggressive run style is forceful and mixed with speed and great field vision, Harris makes it tough for any defense who tries to stop her. Harris has an extensive background in running which can be credited to her track experience while with Nike and even back in college at Western Illinois. As a Fighting Leatherneck Harris set a WIU record in the  indoor 60 meter run and ranks in the top 10 for four other indoor runs, as well as the top 10 in three outdoor runs.

A multi-talented athlete Harris also has been in talks with the WNBA, Chicago Sky, and even European basketball teams are interested in obtaining their own Ferrari.

Harris runs like a female version of Adrian Peterson and has taken the ups and downs that even Peterson has. A bright light, the spotlight, has followed the very athletic woman as she competes in track and LFL with her sights set on the basketball court next?

If her 2013 performance continues, the Chicago Bliss running back may have another feature in common with Peterson and that is the honor of earning an MVP trophy.